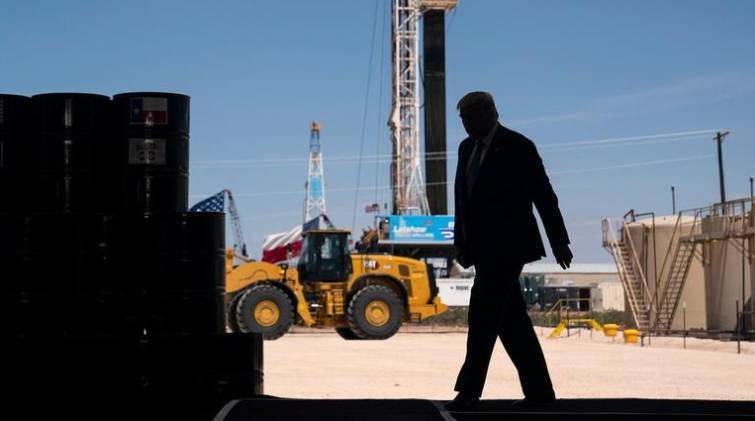 In the event of an election victory, Joe Biden wants to bring the United States back to the Paris climate agreement. His opponent Trump opposes this – he wants US companies to return to the United States.

Trump had announced the exit from the UN climate agreement after taking office in early 2017. Now he warns his supporters in the event of his election defeat in November that the United States will return to the Paris climate protection agreement. When visiting an oil production facility in Midland, Texas, the Republican said such a move would disadvantage the US in global competition and cost “billions of dollars.”

If the Democrats came to power, they would destroy not only the oil and gas industry, but the entire US economy. The US would then become “another Venezuela”.

Trump is currently behind nationwide polls behind his designated challenger in the election, Joe Biden. In the event of his election victory, the democratic ex-vice president Biden has promised to return to the Paris climate protection agreement and has announced even more ambitious goals.

Trump had announced the exit from the UN climate agreement after taking office in early 2017. Trump’s visit to Texas on Wednesday was declared the President’s trip and paid for by US taxpayers. In large parts, however, Trump’s appearance resembled an election campaign event.

Biden and the “radical left” Democrats took a keen interest in the president. “They want to uproot and destroy all American values,” said Trump. Because of his backlog at Biden, he tries to score points in the election campaign on the subject of internal security, for example by sending federal police officers to Portland.

These claims are inconsistent with Biden’s actual program. CNN broadcaster released a poll last Sunday that Trump is behind Biden in three competitive states: Florida, Arizona, and Michigan. Trump had won all three states in 2016.

Trump is currently behind Biden

In national surveys, Trump has been well behind Biden for weeks. However, nationwide surveys are very limited because of the complicated electoral system in the United States. In the end, a majority of 270 state voters are crucial to victory, not the majority of voters.

Trump surprisingly managed to win the three so-called swing states Pennsylvania, Michigan and Wisconsin in 2016. Swing states are states in which the majority of voters keep changing. Even if he lost two of them this year, he would have enough voters – provided he can hold all the other states in which he prevailed in 2016.